As I have said many times before, I have an overpopulation of unwanted bass in my pond.

A pond manager has offered to trade me some stocked trout for approximately 100-200 small (4-10") largemouth bass. I need a way to keep all of the hook and line caught bass alive and healthy for the period while I am collecting them, maybe a period of 2 or 3 weeks. I have been told the best way to do this is in a contained net or pen inside the pond.

Does anyone have any ideas on how to build this pen? Has anyone done a build they could share pictures of?

I have a few ideas on how to do it. The first simplest and cheapest idea would be to keep the fish in a collapsible laundry hamper tied to the edge of the pond. I saw this idea on the internet, but I think 200 bass might be too much for this, although I can always use multiple hampers. Would this keep the fish healthy enough for an extended period? 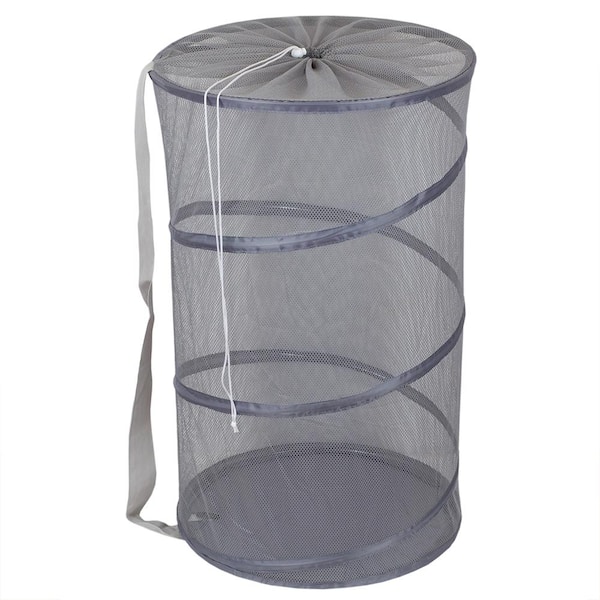 The other option is this build I saw online. This would be more time consuming, but seems better overall. VIDEO: https://youtu.be/mg-BNCGNQkk 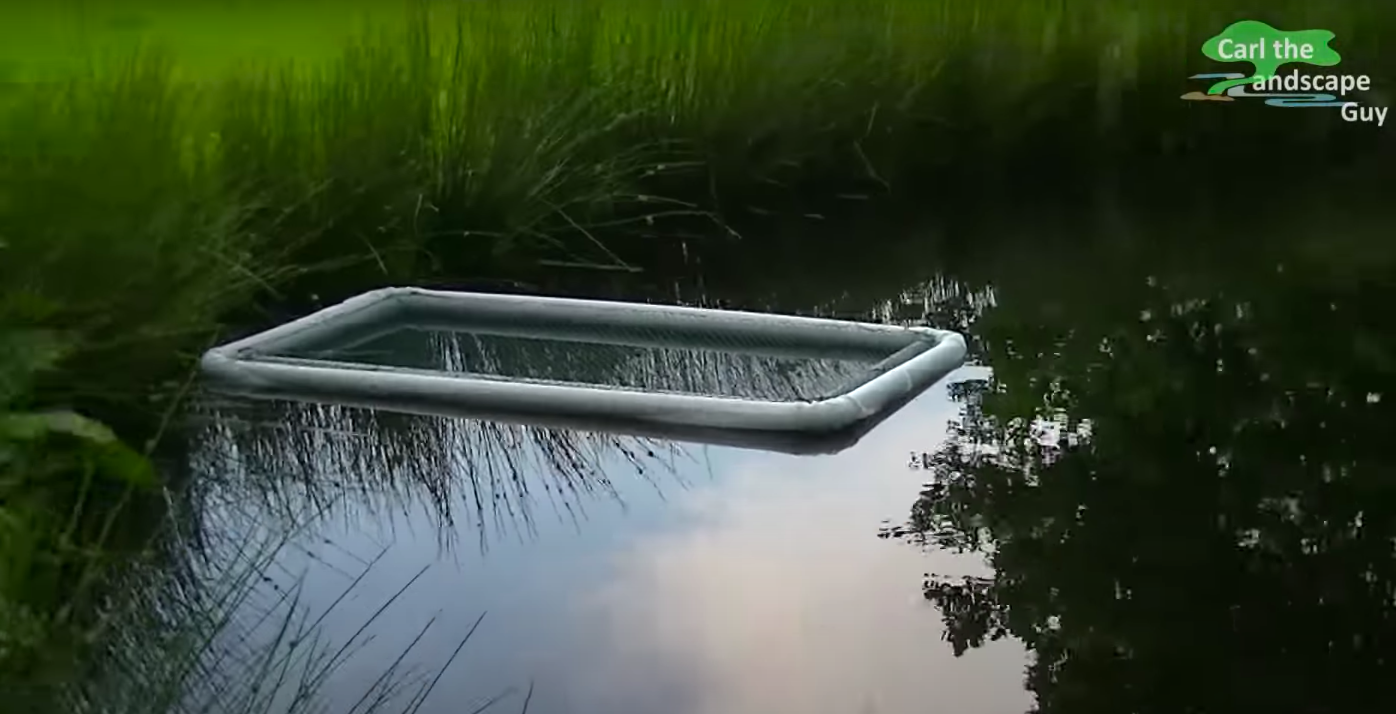 Any input would be appreciated. I will update this thread as I move forward with this. Thanks.
I built this one out of pvc and netting and hang it off the dock. It is 3' x 3' x 6' and I have kept fish in it for a month or more. 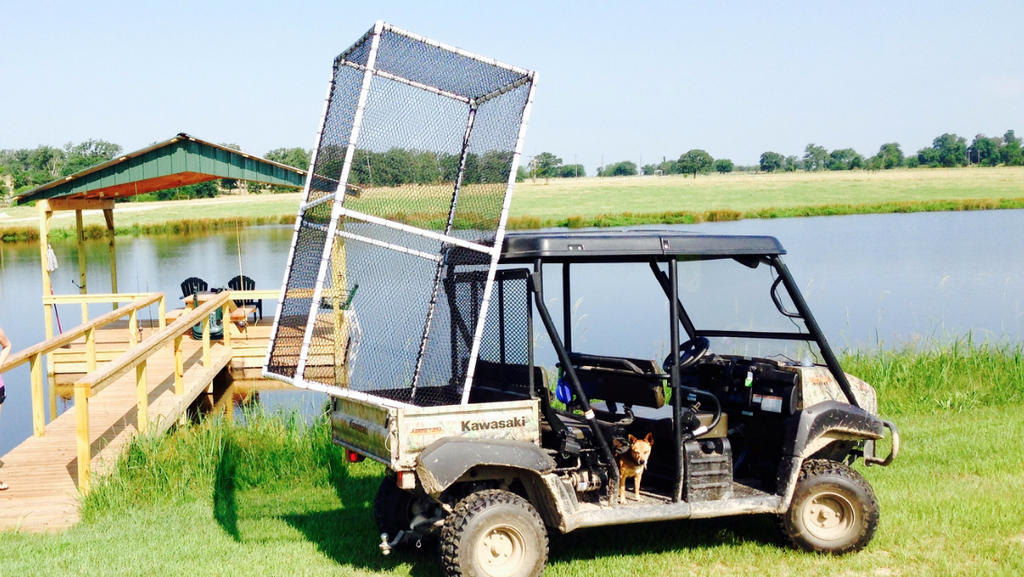 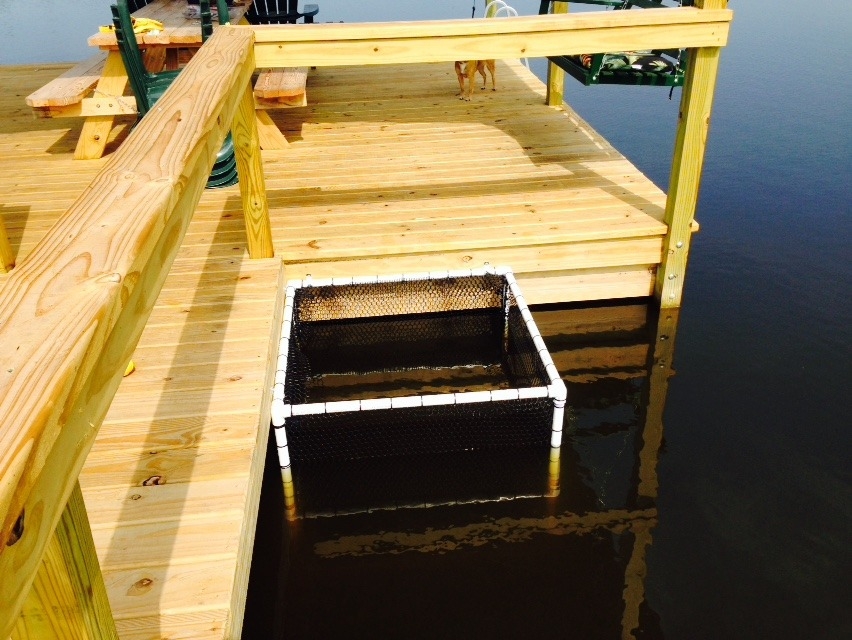 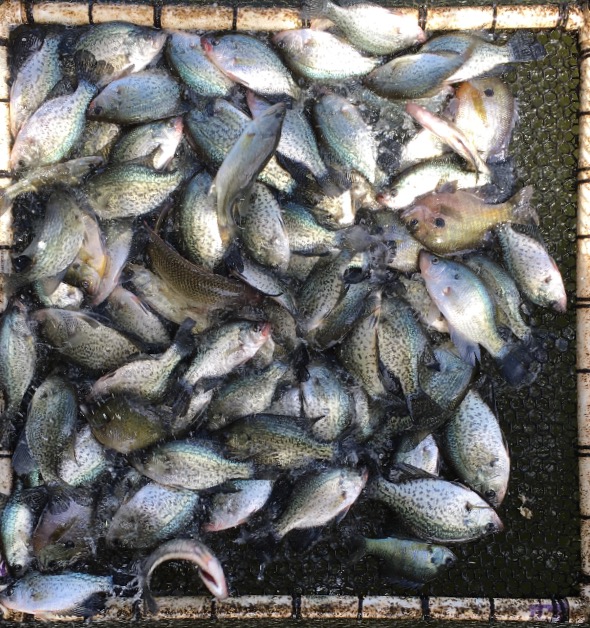 Awesome! Bet you're glad you got your dock built before lumber prices soared!
That looks like a great build. If I can find the time to make it, I will be going that route. Seems like a perfect idea. Have a space to put it as well.
If I can't find the time to build that (we cannot go in to a hardware store right now where I live; everything is online so it is slow to get materials), I will go with this Amazon product which is a keep net. It is not as good as the build mentioned here by Tbar, but should work. Thanks for the suggestions. 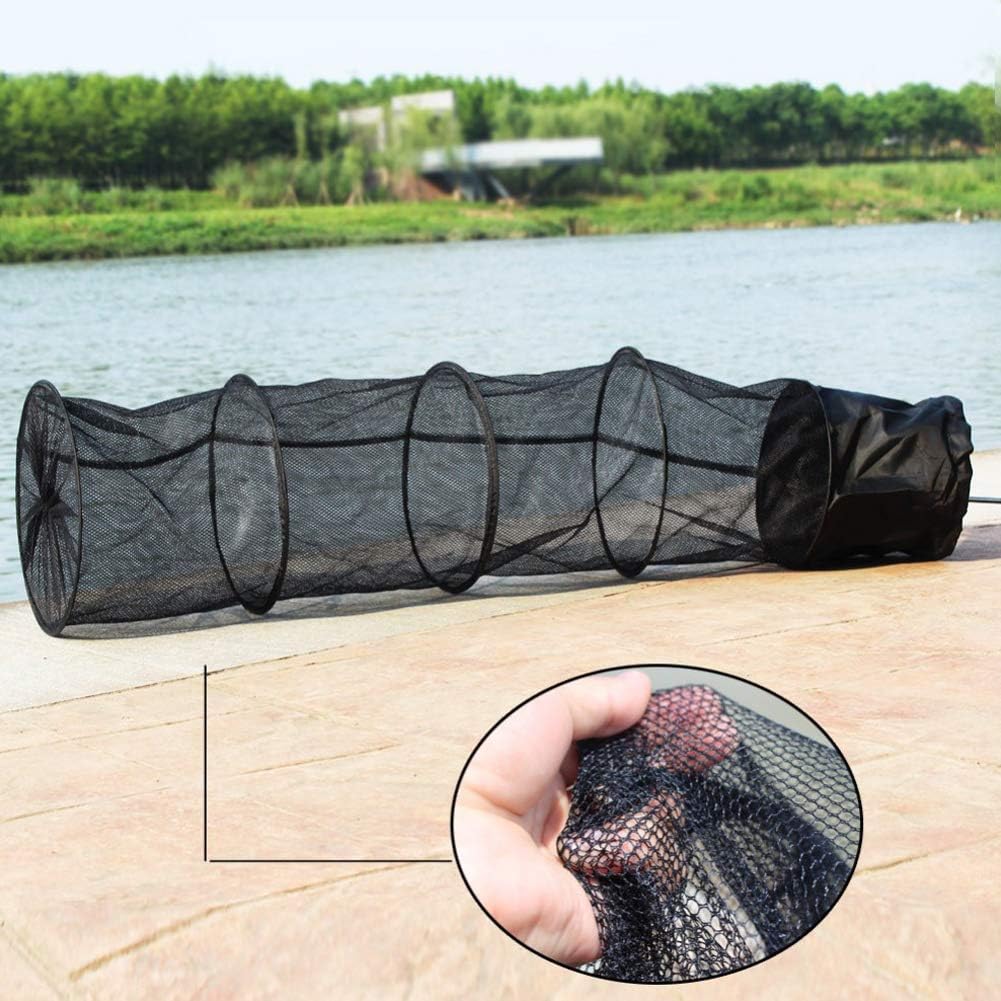 I decided to go with the Amazon net, which arrived today. It does not look nearly as good as a custom made pen made from PVC and netting, but all the hardware stores in my area are closed due to restrictions so making a custom one would be difficult. Here is what the Amazon keep net looks like. It is not very big, but I hope it keeps the bass healthy for up to two weeks. I currently have one fish in it and have tied it to the dock, so it is sitting in about 14 feet of water, extending 6 feet down.

Will bass be able to survive in this for up to two weeks? 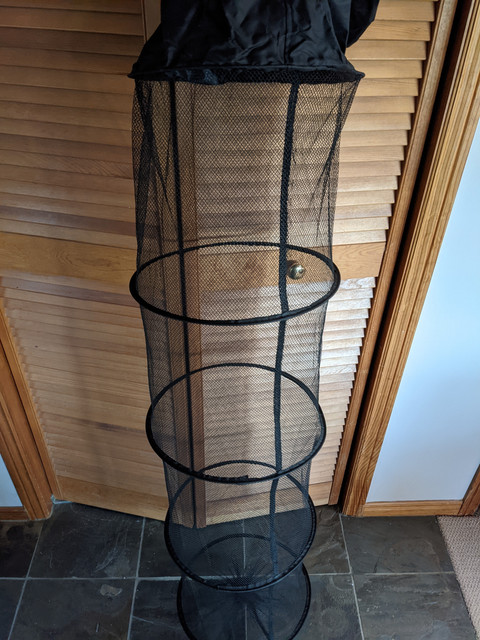 In my twenties, thanks to volunteering when working cattle (branding, castration, inoculation, etc.) I was afforded the privilege of hunting and fishing a >10,000 acre ranch. It was a very memorable time in my life. There happened to a pond on this ranch that had only 1 type of fish in it, GSF (I presume stock naturally in a high water event). Oddly, even without a predator, they attained lengths of 8" in that pond and the fishing was fun and fast. Problem was ... that I over-harvested the GSF and removed the biggest GSF which were cannibalizing the GSF YOY. So after a couple of seasons the pond was seriously over populated with little GSF.

So that fall, I decided to move some LMB from a pond about a 1/2 mile away. This pond was overrun with LMB and the largest I caught from it was maybe 2lbs but there were abundant LMB less than 10 inches and very large GSF, BG, and their hybrids. So brought an ice chest and moved ... I think .... between 10 to 12 LMB that ranged in the 9" to 10" sizes and moved them to the GSF pond. Can't recall exactly but I think this would have been late September. The pond I moved them too was probably around 1/3 acre. I was just trying to add some predation and hopefully see larger GSF later down the road as the LMB recruited.

I didn't return to the pond until the next spring and did so just to check up on the LMB and see if the transplant was successful. This would have been in the late March to mid April time frame. I was blown away with the difference. The GSF ... where before they roamed where they pleased ... were hanging near cover and there were far fewer I could see. But the LMB, they had grown from ~9.5 inches to 14" over same period. To gain a sense of the growth it is from around 5 oz to over a pound. They had tripled in weight. To be sure, they were never going to make it 8 lbs because they probably ranged between 4 and 8 years of age at the time of stocking. But they demonstrated that an old fish can be transplanted and respond well to the move if the conditions in the new environment are favorable. These LMB knew how to capture and consume prey ... they were only held back by the supply of prey.

My sense of LMB is that there is considerable adaptability already built into their genetics for environmental variation of food availability and competition. LMB from an environment where food is abundant and competition is low (they go together) have the genetics to grow slow as an adaptation to environment where they may have been stocked at too high a density. The opposite is also true. There is intense predation pressures for fish populations. I don't see this factor favoring slow growers or smaller fish so I think more than one factor would influence selection and that meaningful selection for slow growth or smaller ultimate weight potential probably would not rapidly occur (In other words, I think it would take more generations than Fyfer's fish have encountered).

I do think that competition and predation are extremely strong selectors and that these two factors dominate selection of those that are most fit. Oddly being a better competitor may make a fish more vulnerable to predation so they seem to balance each other. It's complicated I think. In the end, those that succeed will be those that pass on genes to the next generation providing that generation with keys to reproductive success.
Interesting discussion about largemouth bass growth potential when stunted.

I dropped the fish off today at the fish hatchery. The total number of bass was around 50, 5-10" with most being around 6" I would say. They were transported in a cooler with an aerator and frozen bottle to keep them cool. It wasn't a hot day, and the fish seemed to do well on the 1.5 hour drive.

I'm thinking the rainbows might be more aggressive for ice fishing as Bill Cody has suggested. It will be nice to have two types of trout; I just hope the rainbows will do ok with the warmer water in the summer.
The new approximately 50 rainbows are doing well. They were eating the day after they were added with the browns. They look so small in comparison to some of the larger browns, so I hope they don't get eaten.

Here is a underwater video of the trout during feeding for those interested: https://youtu.be/4Ac31Rpx9cQ
Fyfer, what's making the fish appear so reddish?
Originally Posted by 4CornersPuddle
Fyfer, what's making the fish appear so reddish?
It could be the natural colour of the fish under the water and it might be exaggerated by the camera. They do tend to look like that underwater. They are brown trout so they have a natural red and brown colour.
Originally Posted by jpsdad
Originally Posted by ewest
I would caution that long term stunted populations select for small size in many species. It is a survival adaptation selection process.
Shetland ponies and Mammoth and Mastodons isolated on islands come to mind. On the other hand, I am aware of no research documenting this effect with LMB over time scales of a human lifetime. Please point me in the right direction if you are aware of one.

My sense of LMB is that there is considerable adaptability already built into their genetics for environmental variation of food availability and competition. LMB from an environment where food is abundant and competition is low (they go together) have the genetics to grow slow as an adaptation to environment where they may have been stocked at too high a density. The opposite is also true. There is intense predation pressures for fish populations. I don't see this factor favoring slow growers or smaller fish so I think more than one factor would influence selection and that meaningful selection for slow growth or smaller ultimate weight potential probably would not rapidly occur (In other words, I think it would take more generations than Fyfer's fish have encountered).

Damn!! So, like, you're saying.....Guv is old as hell???!!!!
Dave had a T-Rex for a pet
Pet hell, that was my working bronc back when men were men. BTW, don't ever try to cross breed a mammoth to a mastodon. She's too hard to get into the catch pen. Then you have to hold onto her while the introductions are being made. West Texas is a little different from the sissy places.
© Pond Boss Forum