I have seen several pictures of nests and there is one thing I noticed that these nests and rocks when there is not much water circulation tend to accumulate different algae and lots of filamentous algae,

So before going any further to eliminate this problem, if you tell me that it doesn't matter and the Smallmouth bass uses them anyway, I will do the same.

A+
I have way more SMB spawning beds than I need for a 1/2 acre pond (hey, the rocks were free). In Springs when FA is noticeably bad, the beds that are being used are kept FA-free (presumably by the Smallies). Other beds may be completely covered.
Hello.

I guess it is the same for many member.
So here is what I would like to do to eliminate this problem.

So, for the nests and rocks to always stay clean, I would like to make a breeding pond of about 8ox8o feet, and all around this pond there will be a 6 feet strip full of small rocks on the strip and large rocks on the sides.

In the spring I will monitor the water temperature and close to 8 to 10c I will raise the water in the pond to have 2 to 3 feet of water on the strip, and when the Smallmouth have finished I will let the water go down, so the strip will be dry all summer until next spring.

What do you think.
A+
Having the ability to raise and lower water level is a big plus. I do like the way you think and I would like to hear some input of other SMB guys on this. The farm I bought my first stock from places "tubs" of gravel into his ponds prior to the spawn and has had relatively good luck with that. I'm thinking of trying that method myself. I can't have much exposed rock during times outside of the spawn because of the high number of rattle snakes I have. If I have riprap much more than 2ft above waterline, they will move into it.
I have taken a look at these as they have a couple of items of importance that Bill Cody has touched upon several times.
It could be easily removed after spawning if tied to something.

EDIT: I was trying to post the pic only but it was promoting another pond product supplier... I'm not going to do that here.:-))
Snipe, Talk to TJ. He's the one that made beds that I model the ones I make after. I don't know how crucial it is to have the tall rock on the shore side of the bed, a clients pond has the SMB spawning on a excavator bucket of pea gravel put down in different areas of the pond.

I made some of the spawning beds on TJ's recommendation and not 2 weeks after making them I had SMB using them.

They won't be easily removable unless you can make some sort of 2 or 3 ski system under them, upturned at both front and back to make it easy to push in and pull out of the pond.

Azteca, are you concerned that you might have a lot of above water vegetation start growing up among the rocks that are out of the water?
Hello.

First so that the small rocks does not go into the ground, I will put large and thin rock, then for the little grass that will grow I will apply herbicide.

Or do like the people who put small decorative rocks around their pool, but they put black plastic before putting the small rocks.

But they too over the years must apply herbicide at least once a year.

Also I can play with the height of the water to kill the weeds.

A+
When I asked the guy that built my first pond to put excavated boulders and large rocks into shallow water instead of on the bank, he said that was pretty smart since trying to maintain weeds around them on shore is a chore. After 17 years, I do not regret the decision.
Hello.

I hope to have my Smallmouth bass this year.

There is only one seller here, and he doesn't have one every year.

I guess he must lose a lot of fry.
He don't pick up the larvae in the spring.

To sell them he sets traps in July.
A+
Kenny call me anytime for bed construction, I tried multiple different models the first 10 years of raising SMB and have some direction. Model will depend on whether you plan on leaving them in year round or remove following spawning.
Generally, I do not regard algae whether filamentous or otherwise being a problem for nesting bass. The male digs the nest out just prior to spawning and nest remains relatively debris free long enough for eggs to hatch and often even long enough for fry to swim up. Thereafter the algae is not a issue in the nest itself. What I do not like about filamentous algae is that is does not support a good forage base like phytoplankton and and attached diatoms can. That forage base can be an issue for growth of the fry through fingerling stages.

Cody note: this is very good practical experience and advice from Jim. Jim is correct, once fresh or algae free gravel is exposed in the nest area it takes several weeks or longer for FA to reestablish to a condition where it will deter SMB spawning, egg hatch, and fry swim-up. Critical then becomes having a good balance of zooplankton species to encourage good fry growth. Don't forget that good habitat and cover is also important to minimize predation by other fishes of the fry, assuming that production of bass recruitment is important.
Hello.

I do not know if that's true, but I already been told that the larvae and small fry get stuck in the filamentous algae if there is too much.

A+
See this from the archives on SMB nests.

Actual wild SMB nest. It is next to a wood pier for protection . many have a log or wood near by for fry protection. Also a large boulder/rock is often present. 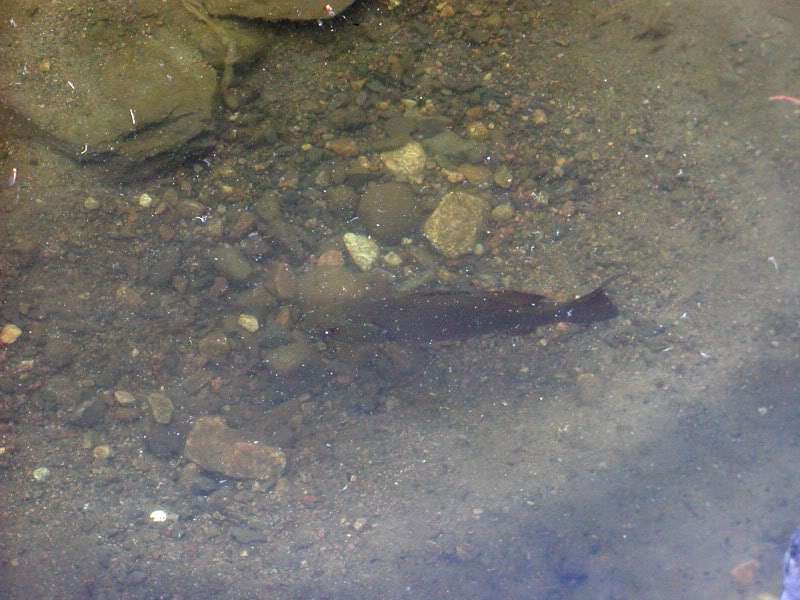