Pond Boss
Last week we moved a cellular game cam up near the main entry road about 300 yards from the front gate.. mainly to see who's coming and going when we are not there. I threw out a few handfuls of corn...and we've been pleasantly surprised to see wildlife at the new...more out in the open... game cam location.....we've never seen a fox on our game cam in the woods, but last night it appears a fox showed up at the new cam location.

you guys think this is a fox correct? 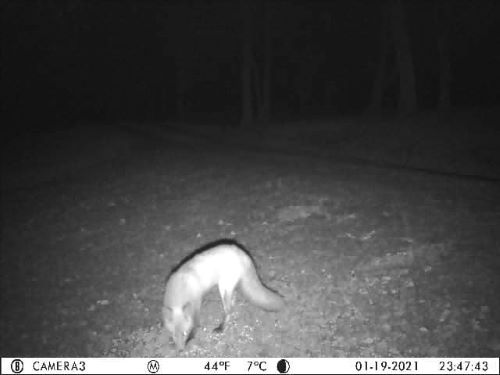 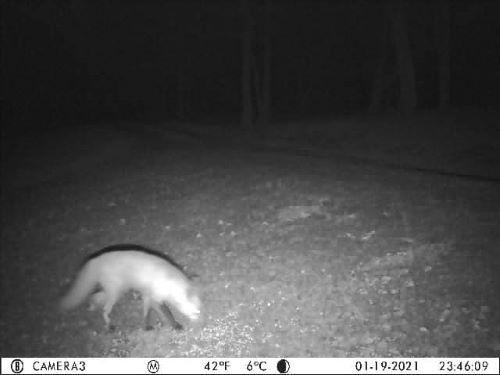 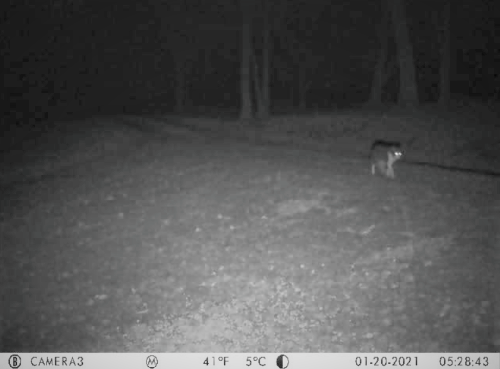 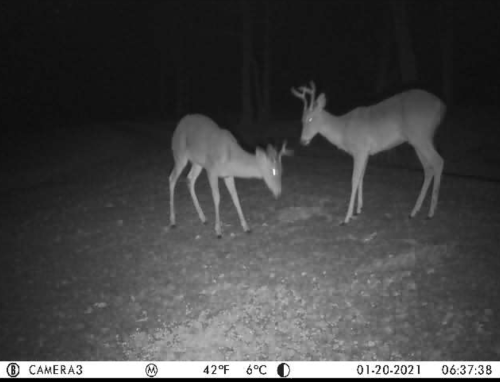 Game cams are something relatively new to us....since we are not hunters...it so nice to be sitting at my office desk and looking at the cellular game cam....to see comings and goings of wildlife and people.

Saw two vehicles pull in today...texted my part-time caretaker....what's up?...."Oh it's my ex-wife making the kid exchange"....
Zep, from the dark coloring on the legs, to me it looks like a Red Fox vs. a Grey Fox. B/W night time pics are always the hardest to try and tell colors.

And as for the "what's this?" picture, to me it looks more like a house cat than a Bobcat just because of the coloring on it's chest and legs. If it has a long tail, it's a house cat. Short tail ( 4" maybe 6") then it's a Bobcat.
Agree on feral housecat
Thanks Scott....have not seen the fox since.
Originally Posted by Zep
Thanks Scott....have not seen the fox since.
They come and go, depending on the local food sources. I have a pair here, I believe they had a den on the property next to mine. This Spring I'd see them on the trail cam going West then going back East a little while later with something in their mouth, one time it was a yearling raccoon. I'm guessing they were bringing food back to the den for the pups.

I'm leery of setting coyote traps here, but found out that I can release the fox if caught without any damage. Let me see if I can find a picture of one from the trail cam. 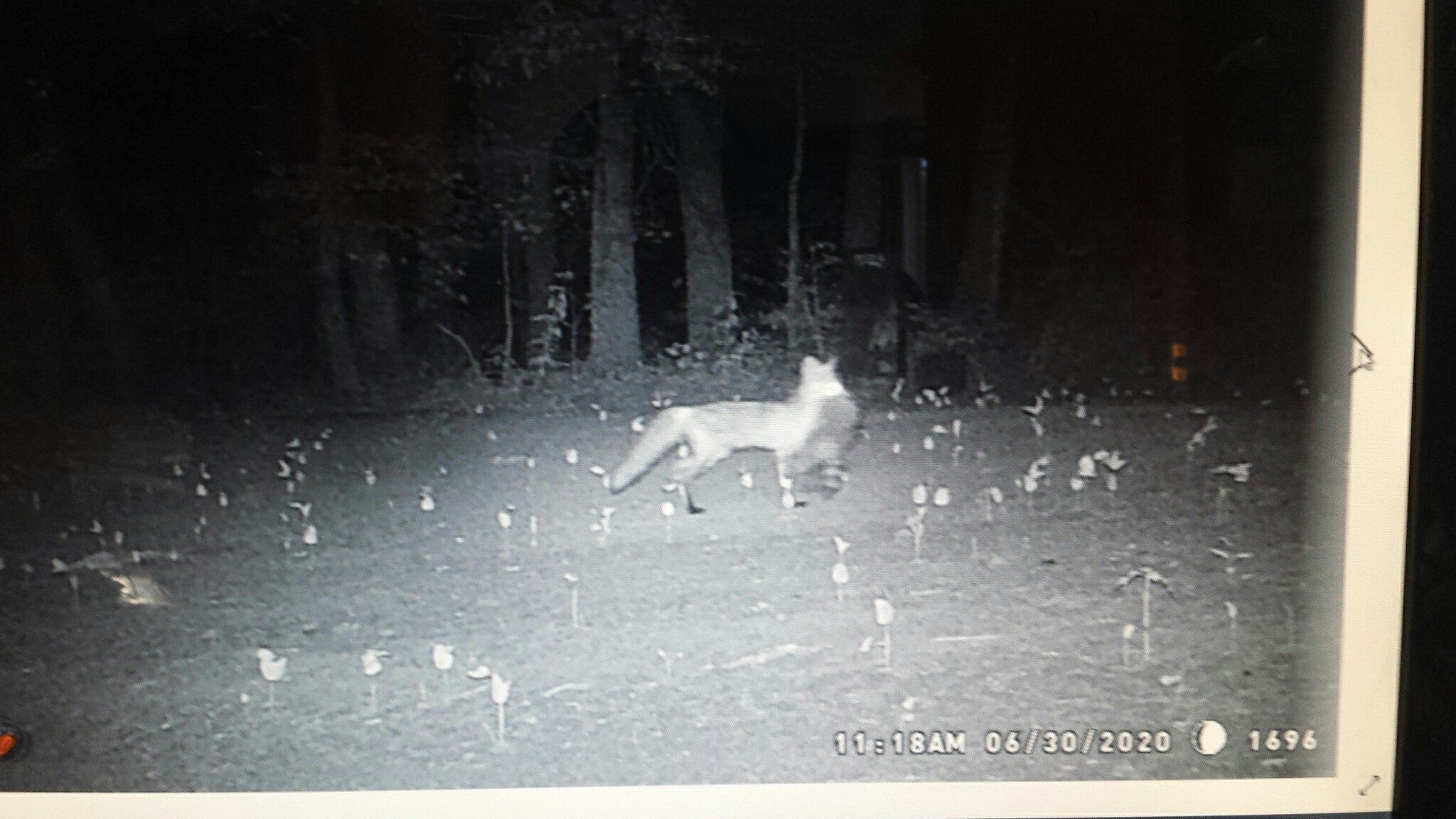 We never see coons in person, but at night on the game cam our place is swarming with coons.
Originally Posted by Zep
Scott....so your fox got a coon.

We never see coons in person, but at night on the game cam our place is swarming with coons.
Yep!! There are a huge amount of coons here, a neighbor that is 1/2 mile away loves coons. He feeds them, and they crawl up on his lap to eat out of his hand too. He even has one of the local nuisance trappers (Critter Control) drop off any coon that they live trap at his place. That's OK, I have plenty of dog proof coon traps. LOL Last year between the next door neighbor (who has a chicken coop) and I, we trapped just shy of 40 coons.
Mother Fox makes her den in one of my hay barns every spring.

I can always tell when she has a litter. It's the only thing that will cause her to come into my yard in broad daylight to steal chickens.
Most years I donate half a dozen, give or take, to her efforts. Mrs. Augie doesn't much like it, but I know that if I get rid of the fox
the place will be overrun with field mice and rats in no time, so I let her hang around.
We have fox after a long absence. The coyotes really are hard on them. I think the fox are using human habitation to carve out a niche where coyotes are more reluctant to go.
IMO we would be much better off with less yotes and more fox !
Originally Posted by esshup
Originally Posted by Zep
Scott....so your fox got a coon.

We never see coons in person, but at night on the game cam our place is swarming with coons.
Yep!! There are a huge amount of coons here, a neighbor that is 1/2 mile away loves coons. He feeds them, and they crawl up on his lap to eat out of his hand too. He even has one of the local nuisance trappers (Critter Control) drop off any coon that they live trap at his place. That's OK, I have plenty of dog proof coon traps. LOL Last year between the next door neighbor (who has a chicken coop) and I, we trapped just shy of 40 coons.
Plus one on the dog proof traps, last winter I probably caught 50 coons in my dog proof traps and another dozen this winter already, we were over run with them, my theory is they are discouraging and even eliminating wild turkeys in my area by eliminating nests among other things, I had a lot better turkey numbers already the first year after thinning the coons out some, I have several other friends that had the same results, they just multiply so fast without anybody hunting them anymore.
That being said, I have a picture from my game camera of a coyote with a coon in his mouth.
I've never caught a dog in one, but I have caught a feral house cat and 3 opossums. I was using dry cat food for bait.
Ive caught a dozen opossums, several cats, several skunk and umpteen coons, I have used several different things for bait but have had some of the best luck with fish food, (seems to hold up better when it gets a little rain), and then I put a drop or two of anise oil on it for long distance attractant, they can smell that stuff from a long ways.
What do you do with the possum? I have told they are very beneficial for insect control, understand they will virtually control your tick population. I live in the middle of 130 acre forest and have not seen a tick for years. When i catch a possum in my have-a-hart traps i release them. I understand there used to be a disease they carried that was fatal to horses, but they developed a cure for that years ago. i give my live coons to a man who lives about a mile away, he trains coon dogs and hunts coons. I never asked how he uses they for training, but i'm guessing they have a rougher go than if i just shoot them, which is illegal anyway.
I'll use a can of sardines. Pop a couple holes in the top using a claw style bottle/can opener. That way it can't get to all the food and can be reused.
I think that dog trainers use rolling raccoon cages. https://www.youtube.com/watch?v=qgPraKAaszM
I have a fellow trapper that was able to give the coon carcasses to individuals for eating purposes in the St Louis area, whenever we had a few in stock they would come and get them and we would get a few bucks out of the hides, but this year we have not been able to even give the hides away.
My neighbor tells me only big raccoon pelts are salable this year. We have distemper in the area, so I have requested he dispatch the small ones. Raccoons can harbor fatal parasites, so even with cooking, I will steer clear of them. I have also been told that they are an acquired taste. Our dogs do love muskrat carcasses though!
Fred (Bing) , I also make sure that nobody harms my possums.
Originally Posted by RAH
Raccoons can harbor fatal parasites, so even with cooking, I will steer clear of them. I have also been told that they are an acquired taste.
We had an engineering intern at work who grew up in a rather rural county, in a family that regularly ate raccoon.

He came in one day, stating that his Mom had fixed 'coon the night before. After three years of being away at college, he didn't even like the smell of it any more.

So raccoon can also be an unacquired taste.
Raccoon is one of my favorite wild game meats. Groundhog, beaver, muskrat, all good, but I draw the line at possum.
A critter that will crawl up inside of a dead cow can't be good for you.

Yes, my upbringing would also be considered "rather rural". lol
Augie,

YOU must know the proper cooking procedures! From what I hear...you don't just "cook'm up",but rather perform a series of prepping, boiling, frothy foam removal, crockpotting, pulling, and more crockpotting (with ample BBQ sauce).

What's your recipe?
My recipe is simple.

Toss varmint carcass in roasting pan/slow cooker/crock pot.
Chop up some carrots/potatoes/onions/celery/garlic/etc. and toss in with varmint carcass.
Season it like you would roast beef or meatloaf.
~350° until the bones pull free with little to no resistance.
Serve it up.

If you like it with BBQ flavor, pull it out of the roaster before it starts to fall apart, transfer to a hot charcoal grille, and finish it there.
I like a sticky sweet sauce on varmint. Bone Suckin' Sauce and ShowMe are probably my favorites.

I've heard of people doing the boiling thing, but I've never understood the purpose for doing it.
To my way of thinking meat and water only go together if you're making soup.
I've eaten coon grilled and it was not bad, fact is it was pretty good. Not sure if the guy who served it up did any other preperations orther than throwing it on the grill. I once fed my X calf fry's. It was something I grew up eating in Oklahoma. If you can get by the thought of it, it's really good. And after living in Louisiana, there are alot of foods prepared there that one would not think of eating like tree rats and the brains.
Louisiana is something of a culinary trendsetter. Catfish, crawfish, alligator, redfish... All were considered low class fare, even "trash", at one time. Not any more!
I had heard bobcat was good to eat. A friend killed and cleaned one. I remember the meat all being real pink in color. We cut pieces of it off and put on the grill with deer meat and had guests over to eat. We had left over deer meat but ALL the bobcat was gone!! It was really good! I was told since they typically only eat fresh killed meat that they are safe. All I know is it was very tasty! Has anyone else ever eaten bobcat?
Only at Chinese restaurants.
I read where Mt lion was good but was mostly white meat.
© Pond Boss Forum