Pond Boss
Who knew that 2 doz. sunfish and 4 turtles could be trained to show up to be fed bits of bread daily in my pond whenever I stand on a small dock. In fact sunfish leave wakes from different sections of the pond swimming toward the location when they see me walking down the hill.

Once the sunfish slap the surface competing for the bread, the turtles start swimming towards me from different areas after popping their heads up to make sure I'm there. In fact they are almost at my feet waiting to be fed trying to get something before sunfish (some that swim on their sides in even under two inches) to steal bread thrown to them. A few of the turtles will even follow me around the pond as I walk the shore.

About a doz. sunfish are stationed in that location permanently - ages 1 year to adult size - parked in parallel waiting for a tidbit no matter how small.

Strange but true is the dominance factor:
The smallest of the turtles with moss growing on its back is very territorial as it waits for bread, biting and chasing trespassers near it! Same for one pumpkinseed sunfish that chases all others competing in mass like a school of piranhas! A few small bass will occasionally swim by wondering what all the commotion is about and then swim off never bothering to attack even the 2.5" fish.

I try not to fish my lures in the pond to test them or at least not allow fish to set the hook for me. Their like pets. 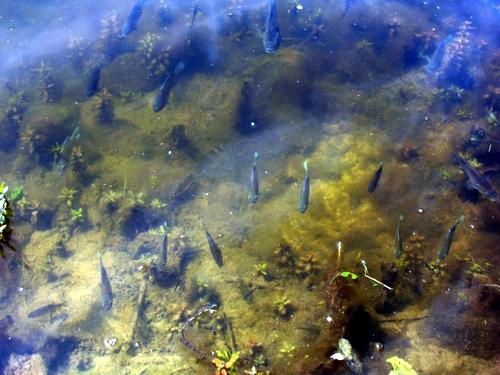 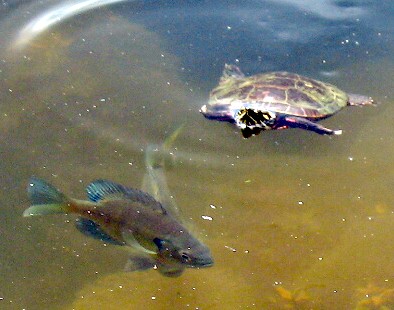 Very cool Senko. Your post reminds me of a pet turtle I had quite a few years back that had moss all over his shell. Kept him in a swimming pool in the back all summer and trained him to eat night crawlers from my hand. Would come swimming over as fast as he could whenever I walked back. I let him go in a little pond nearby late that summer/fall so he could get ready to hibernate over the winter. I was out at that same pond catching minnows the following summer and a little painted turtle with moss on his back came swimming up. I'm positive it was the same one. Any time I was at that pond that summer he would swim up and have a few minnows from my hand.
What I found amazing is that the bass and larger sunfish in the pond will strike lures even though small easily consumed yearlings swim about. A few days ago I tried a weedless jig I hadn't tried since making it last year. Sure enough, a bass and then a large sunfish ambushed it as it emerged from some weeds!

Makes me wonder though: how many are too many to stock of the different species? I have unlimited supply nearby of many species and in different sizes. No point adding sunfish or bass and not sure how well the crappie and perch are doing though a do see small yellow perch swimming around ever so often.
Feeding is a wonderful thing.

Of course, it's your pond to do as you please with, but if you're going through the effort to spend the time to throw bread, you might as well derive other 'low-hanging-fruit' benefits from actual fish feed; those benefits are many.

Neither does ice cream but I can still eat a half-gallon in no time. Birds, fish, turtles and my dogs all love bread of any kind. Who knew?

BTW: 12 " LM bass come near lying on the bottom to see what all the surface commotion is all about as the fish crash into each other for bits of bread but never feed on the smaller gills.
Plus, too bad the turtles aren't fast enough to keep bread bits being stolen by 'gill in 2" of water and at times right from their mouths.

Another thing: The large algae balls from last spring and most of the summer are gone. Could it have been the 7" of rain that fell in the last month? (Ida and 1.5" last week)
If you want to feed the fish, why not use something that will benefit them? I would SWAG yes to the reason for the algae leaving. Don't worry, if it heats up it will be back.