Pond Boss
I've always run water tests a couple of times a year since we've had this place. I was a little remiss in doing multiple tests in 2018 and 2019 but still was fairly well on top of my pond water chemistry nonetheless.

Every year, we stock RBT in late fall for the Project Healing Water folks. This year, I did a water sample in August and the alkalinity was the lowest its ever been. I normally add 20 tons of lime every 3-4 yrs or so when the alkalinity drops below 20 or so but this year I dumped in only 10 tons of lime (in 4.6 acre pond) late August because I feared a high alkalinity spiking that might adversely affect my upcoming RBT stocking. When I received my most recent post-lime test results, I am stunned that the alkalinity hasn't even budged while other test areas fluctuated wildly from the August test. Having seen the significant rise in alkalinity from previous liming, I am totally baffled by this. I've attached the spreadsheet I use to track all of my water samples so you can see what has happened in the past post-liming vs this latest round.

For reference purposes, I am using the same lab I have always used. Collecting the sample from pretty much the same area of the pond, ie between two aerators in the middle, I always have. The only small difference may be that I have typically used those TSA 4oz plastic liquid bottles you get at Walmart for my water samples. For the last two samples, Walmart was out of the bottles so I bought a four-pack from CVS and they were a different brand.

As for the lime, I have always used AgLime and purchased it from the same Co-op that I have always used in the past. I order it by the truckload. Before they arrive, I move one of my aerators close to the point on the lake. The spreader truck shows up, backs up to the point, and blows the lime out into the pond and the aerators help circulate it. Within 45 min- 1hour, the entire pond has a milky appearance and remains that way for a day or so.

A couple of questions...could I have some how contaminated one or both samples? I've never heard of a 'bad batch' of lime but is that possible?

Thanks in advance for your responses and Happy Thanksgiving to all.

Did you have a flood event in the spring or summer this year that washed in some nasty deposits? For instance, cattle feedlot, construction project, significant amounts of decayed plant debris from someone's pond upstream, or any other unusual event?
FishinRod, you're right about the pH. That even baffles me more. We did have some heavy rains with some serious outflow of water but don't think its enough to dilute the alkalinity to zero but I guess possible Although, AgLime dissolves over time so I can't imagine it all being gone.

The lake sits in a bowl and is basically fed by runoff, all forested, and a few underground springs. Fortunately, nothing 'nasty' in our runoff areas.

The other thing unique to this year is that I had a pretty significant hyrdilla growth this year and the 'die off' was occuring about the time of the water sample. But again, I just can't see how there is zero change in the alkalinity
Forest ponds tend to have more tannin in the water from the decay of the organics. Humic substances chemistry gets very complicated very quickly. A little bit of the forest floor could have washed in during the heavy rain events.

Did your pond water ever take on more of a "tea color" after the floods? I guess the weak acids could have used up all of your lime buffering capacity without moving your pH too far or harming your fish. (No fish kills, I presume.)

As regards the hydrilla die off - All of the experts get worried about the dissolved oxygen depletion during vegetation die offs. I have never heard of a water "chemistry" crisis from the plants that resulted in harm to the fish. (But my knowledge is very limited on that topic.)

Hopefully, one of the chemistry experts here will wander into your thread.

*** I did just remember one more thing from a college chemistry professor. He said that when you get a very strange result - run your test again!

Good luck with your RBT. You need lots of hungry ones in your pond for the Healing Waters vets! It is very cool that you do that charity.

FishindRod, I misspoke a tad earlier. I just doublechecked my records and the water sample was actually drawn and sent off the day before the heavy rainfall. With that said, yes, the heavy runoff did produce the "tea color" and I never equated that with the tannic acid in the runoff. Thanks for the 'edumication" on that issue.

No fish kill, in fact, the RBT are still very active at the feeders.

I am going to re-test. I talked to the lab about that yesterday. I have some extra BPA-free, sterilized honey jars leftover from my honey extraction this year and I am going to use one of those for the repeat water sample.

I'm still a bit befuddled by this, particularly with no discernible swing in the pH.

Thanks again for your input.
I got the retest results back and I am still baffled, particularly with almost an 9x decrease in the amount of potassium. Makes no sense to me. To make matters worse, I bought a couple of bottles of those water test strips for pools and the test strips show the alkalinity in the 80-120 range....and the trout are still aggressively feeding and from all I have read, they shouldn't be if the alkalinity is as low as the lab results show.

98 ppm potassium has to be an error. I believe the 8.8 to be acceptable. 2 to 16 seems to be a normal range for Potassium. 8.8 is not "H", 98.anything is extremely high and I'm not sure it's even possible.
Back in 2014 you had 9.8 and 11.2 both listed as "high", then median values of 2-4 as medium. I strongly believe the 98.8 is an error.
There are 2 standards for testing this, one is for soil, one is for water, 1-50ppm being lower and upper limit on water, yet commonly 300-500ppm in the soil adjacent to pond. It gets fairly complicated on how the soil interacts with water and how potassium is figured.
To me it looks like there are a lot of irregularities in the test results but that is only my opinion.
Thanks Snipe. I have decided to not lose any more sleep over this for two reasons. Over the last week or so, I have tested the water using different types of pool test strips. All showed the alkalinity and pH in the desired range. Secondarily, we measured and weighed 20 of the 200 RBT when we put them in about month ago. They averaged around 92% of their relative weights. Since Friday, we caught 12 and measured and weighed each. All were 98% or better, with the highest 115%, of their relative weights. Granted, this is not a 100% scientific sampling but it was enough to give me a better piece of mind.

Thanks again to all for your input.

Merry Christmas to all,
Paul
Here is some info. I dont think your alkalinity dropped from 60 to 1.5 like that. There are other inconsistencies as well. See below. 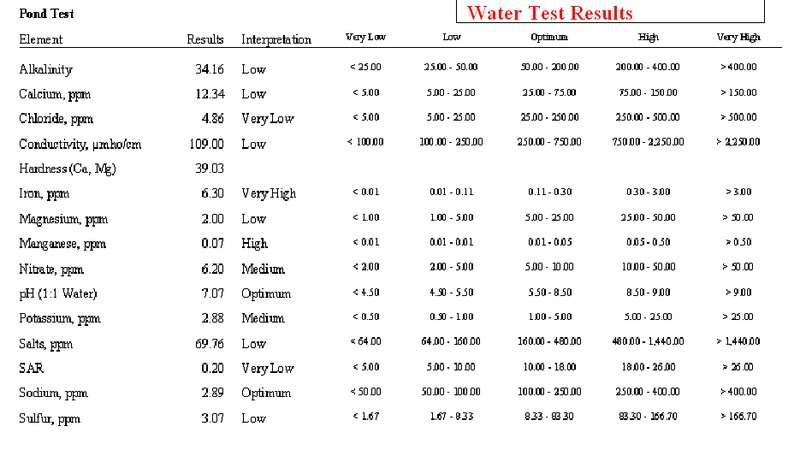 Thanks Ewest. FYI, the lab results you posted are from the same lab I have been using. I can tell by the format.They have always been very good and I am just baffled by the results in the original test as well as the retest...from the same lab BTW.
That is one standard format used. One above is from LSU ag.